Since the Almond Board of California (ABC) Board of Directors approved the Almond Orchard 2025 Goals last summer, ABC has been hard at work sharing the goals within the industry and helping industry members understand what they can do to move the needle in achieving them. 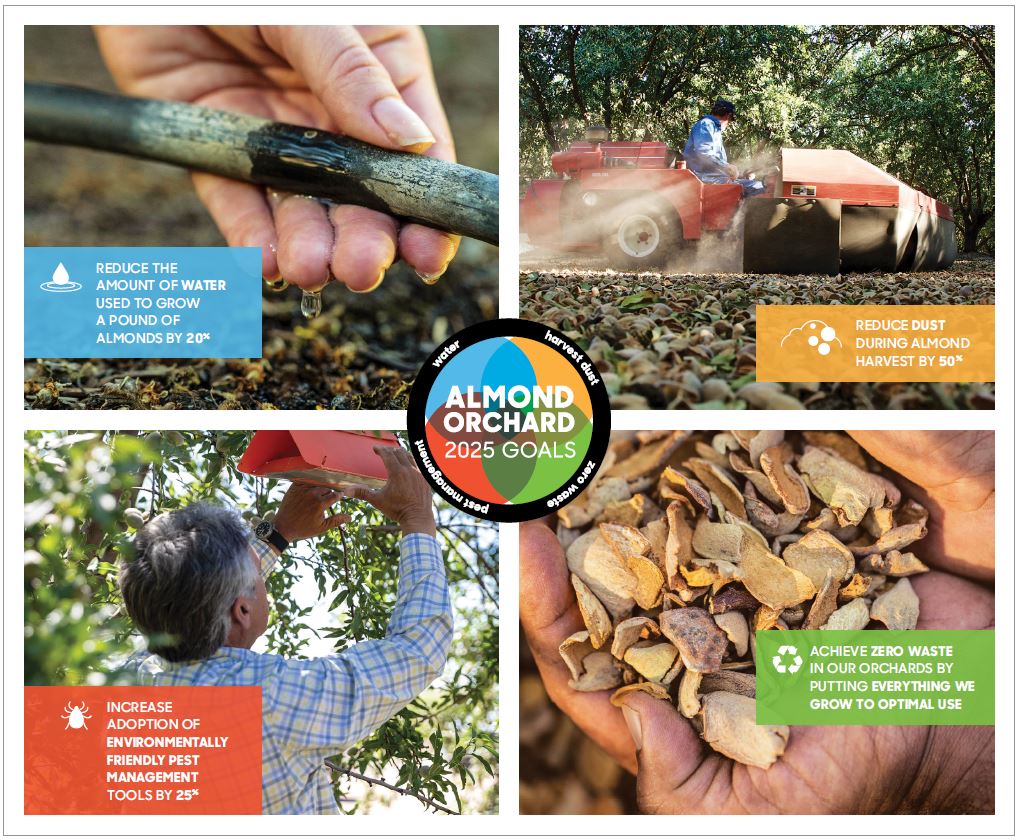 What began with an industry-wide introduction to the goals late last summer progressed to a full-blown rollout at the 2018 Almond Conference in December, as attendees had the opportunity to take a deeper dive into the four goal areas: water use, harvest dust, pest management and zero waste from the orchard. With the industry informed, inspired and ready to make progress toward the goals, the Almond Board felt it was time to share the goals with another group important to our success — consumers.

“Certainly, the goals help us align as an industry to make sure we’re all headed in the same direction, but they also have value outside of our industry,” said Daren Williams, senior director, Global Communications for ABC. “They provide a powerful platform for us to communicate to the world about our industry’s journey — to reinforce our commitment to sustainability and continuous improvement.”

Before launching the goals publicly, the Almond Board conducted consumer research to gauge their reaction to the goals. Consumer feedback was encouraging — almond lovers wanted to learn more — indicating that broad consumer communications about the goals and the almond industry’s continuous improvement efforts would be well received. The zero waste goal resonated particularly well with consumers, many of whom are also working to reduce waste in their own lives by reducing, reusing and recycling.

““The consumers we met with appreciated the idea of industries setting goals and being transparent about them,” Williams said. “They really do care about how we grow almonds and want to feel good about the food choices they make.”

Those who attended The Almond Conference in December had an opportunity to see that same feedback in real-time as the ABC team hosted a live focus group on day two of the conference. Four consumers bravely walked on stage in front of nearly a thousand people, knowing only that they were at a food industry meeting and that they would be asked to openly share their perspectives about the food they buy. During the group’s discussion, each consumer was asked questions about food in general and then about the almond industry, specifically. Across the consumer panel, all had positive things to say about almonds as a healthy, nutritious snack and were genuinely impressed with the industry’s efforts to improve practices in specific goal areas.

“The live focus group at The Almond Conference was one of the most talked-about presentations on the agenda,” said Danielle Veenstra, communications manager at ABC. “It’s easy for all of us to get caught up in our day-to-day operations but hearing directly from consumers about how they view the almond industry and the values they have around their food choices was enlightening. I think it helped many people see how our goals serve a purpose outside of our industry.”

The Almond Board will continue to communicate with consumers about the goals and efforts made by the industry to achieve them through various channels, including blog posts, social media, news articles, videos and publications. Consumer communications stress the industry’s careful and responsible resource management, ongoing efforts to grow almonds in better, safer and healthier ways, the value of the industry to California and our continued focus on innovation.

Response to the public release of the goals so far has been strong, and positive. Several news outlets have covered the story in its first week, including the Turlock Journal, the Stockton Record and even Prepared Foods, an outlet focused on food industry news and trends.

To learn more about the goals, go to Almonds.com/Goals.