Earlier this spring, Almond Board staff represented the California almond community on an international scale during their trip to India and the Middle East. ABC’s trip started in New Delhi with a meeting at the U.S. Embassy and ended in Dubai with trade exhibition and seminar for Russian importers. From the get-go, ABC staff – Richard Waycott, president and CEO; Julie Adams, VP of Global Technical and Regulatory Affairs; Sudarshan Mazumdar, India Program Director – had a packed agenda.

In New Delhi, the Almond Board met with Ambassador Kenneth I. Juster and staff at the U.S. Embassy. The group’s discussion focused mainly on the California almond industry’s marketing investment in India, as well as an update on the regulatory issues that ABC continues to monitor, such as retaliatory tariffs and technical issues that could impact future shipments of almonds.

“We are always appreciative of the time and attention we receive from the U.S. Embassy when we are visiting India,” said Adams. “As the largest ag export to India, it is important to keep the Ambassador and staff apprised of the California almond industry’s activities and to provide suggestions for areas of potential collaboration.”

ABC also hosted its annual Almond Board of California Trade Conference in New Delhi, inviting key stakeholders to hear from U.S.-based ABC staff on topics including production and technical issues, investments and marketing programs. The conference also provides ABC with a unique and important opportunity to thank trade attendees for their continued support of California almonds. 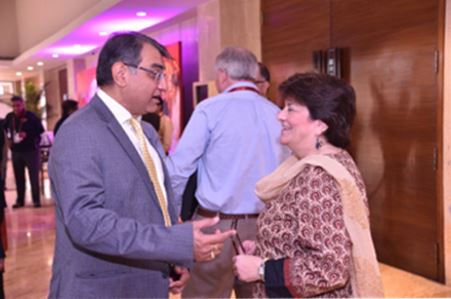 “Every year this conference proves the tremendous growth opportunity that exists in the Indian market. This year that sense of market expansion was even more apparent given the representation of industry members from all regions in India who attended the conference,” said Waycott.

The following day, Waycott addressed attendees of the Global Cashew Summit, also in New Delhi, and shared with them the California almond industry’s strategic goals as well as the promising future for tree nuts in Indian markets. Waycott said it was an honor to represent the California almond industry at the event, during which he pointed out that the nut industry has barely scratched the surface in terms of global consumption of tree nuts. “There is sufficient space for all of the tree nut groups to continue to build their presence,” Waycott stated.

After their time in India, the Almond Board troupe flew to Dubai to participate in the largest annual food and beverage trade show, Gulfood. The show attracts over 100,000 attendees and 4,000 exhibitors from around the globe, and this year’s event witnessed an especially strong representation of almond handlers. With access to a massive audience, ABC and handlers had the unique opportunity to meet with customers from the Middle East, Africa and Southeast Asia during a time when there is a growing interest in California almonds.

The Almond Board received multiple inquiries from individuals interested in the California almond industry and shared the latest on almonds’ nutritional value, grades/standards, food safety practices and market development activities. In addition, the ABC team held meetings with various European companies and stakeholders interested to learn more about the industry.

For the final leg of their trip, Waycott, Adams and Mazumdar hosted a seminar attended by Russian industry leaders and David Leishman, director of the U.S Agricultural Trade Office in Moscow. The seminar allowed ABC to reconnect with the region and key customers, providing updates and discussing opportunities for California almonds.