(April 9, 2018) - Growers know that successful nitrogen management hinges on the four R’s: nitrogen needs to be applied at the “right rate,” at the “right time,” in the “right location” and using the “right source.” But there’s a fifth R out there — “right monitoring” — and leveraging it effectively on an operation may help maximize productivity and minimize loss.

The right monitoring takes the four R’s a step further by allowing growers to understand the plant nutrient status at a given time. The common monitoring practice of leaf tissue sampling offers a snapshot of a nitrogen plan at work, but, as recent research suggests, conducting the sampling earlier in the season can lead to more actionable results.

“The current practice of leaf tissue sampling in summer months certainly provides a reliable and realistic measurement of nutrient concentration, but it doesn’t leave you with much time to make adjustments for that growing season,” said Sebastian Saa, senior manager, Agricultural Research, Almond Board of California (ABC). “Since 80% of nitrogen uptake is complete by the time leaf tissue samples are historically taken, we wanted to explore the potential value of sampling earlier in the season.”

With research funding support from ABC, a team of researchers, including Saa and led by UC Davis plant scientist Patrick Brown, set out in search of an answer. 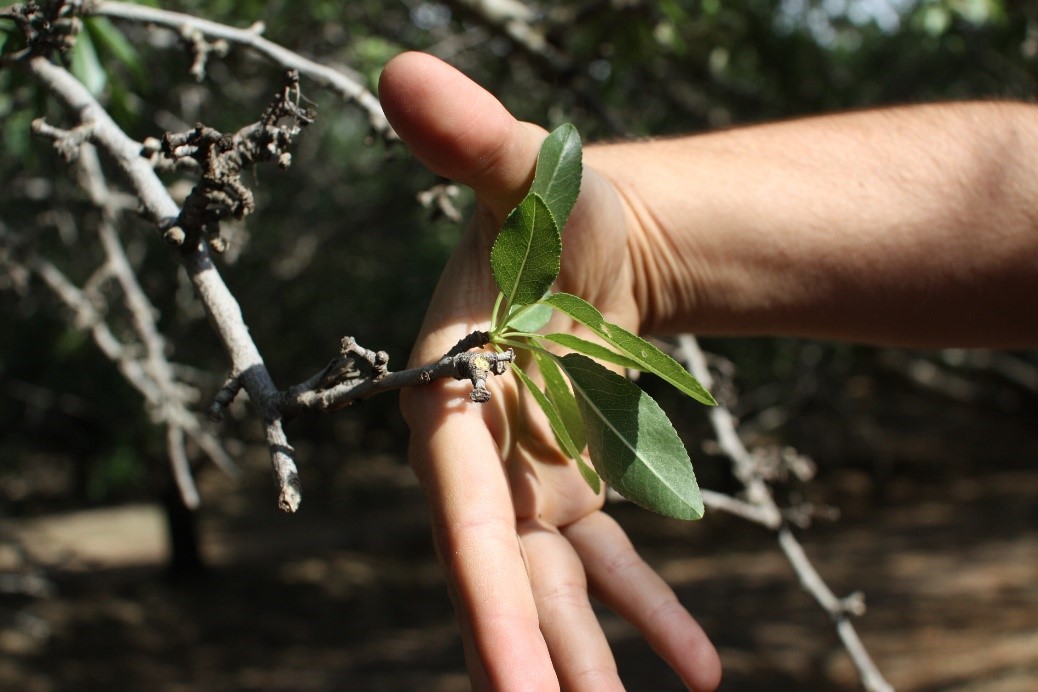 The team’s work resulted in a new protocol that ensured nitrogen rates targeted the productivity of an individual orchard for that same crop year. The protocol recommends sampling in April — approximately 43 days after full bloom — following proactive leaf tissue sampling guidelines known as the UC Davis Early-Sampling Protocol (UCD-ESP). These protocols are the product of four years of research, with trials conducted at multiple sites and additional validation trials conducted in 2012.

“Taking proactive leaf tissue samples and combining the results with yield estimates allowed us to effectively plan in-season nitrogen demand,” said Saa. “With the prediction complete in early spring, we still had time to adjust May-through-July fertilization plans, if needed.”

Access to leaf tissue analyses earlier in the season is just what many growers want. A survey conducted at the outset of the research in 2007 found that a majority of growers and consultants felt that leaf sampling did not provide sufficient guidance for nutrient management and that improved monitoring tools to better reflect tree nutrient demand were needed. Improving the precision of nutrient management would allow growers to be more efficient with nitrogen products, benefiting profitability and lowering potential environmental impact.

“There’s still value in a July sample; however, adding an April sample allows us to make a prediction and adjust accordingly,” said Saa. “Following up with more sampling in the summer would evaluate the impacts of those changes, thus informing plans for future seasons.”

For the most accurate results, leaf tissue samples should be representative of the almond trees in consideration. For these groups of trees, homogeneity is key. If all groups are homogenous, then one sample could suffice. However, if there are substantial differences in orchard age, predicted yield or soil type, for example, growers should conduct a leaf tissue sample for each group.

After determining the number of samples needed, growers should:

With lab results in hand, it comes time to sift through the analysis and predict nutrient needs for the remainder of the season. A handy tool to reference is the Nitrogen Calculator available within the California Almond Sustainability Program.

“Utilizing the California Almond Sustainability Program is the most integrated way to get a nutrient prediction because it’s merged into the Nitrogen Calculator, a tool that many growers are already familiar with and use,” said Saa.

The Nitrogen Calculator not only helps manage nitrogen applications for efficient fertilizer use, but also generates a Nitrogen Management Plan as required by the Irrigated Lands Regulatory Program. Growers input their data and the Nitrogen Calculator provides a total nitrogen fertilizer budget, along with recommended amounts to be applied according to crop growth stage. In addition, it recalculates fertilizer rates as April leaf sample data and/or better yield estimates become available during the season. The calculator has a library of fertilizers in pull-down menus for easy rate calculations, based on data you enter in the system, and it calculates nitrogen contributions from non-fertilizer sources, including groundwater, compost and legume cover crops. It can even clone the nitrogen budget from one orchard to another within and between years if orchards are similar.

Putting it all together

Even with all the research and validation in recent years, proactive leaf tissue sampling remains just one component of effective nitrogen management. To integrate early sampling into their holistic plan, growers should:

“April sampling is a valuable tool in the toolbox,” said Saa. “When used in conjunction with the other four R’s, growers can become more efficient in their nitrogen use.”

To learn more about managing almond tree nutrients and to access the Nitrogen Calculator, visit Almonds.com/Nutrients. A more detailed review of the UCD-ESP is available in the article “Almond Early-Season Sampling and In-Season Nitrogen Application Maximizes Productivity, Minimizes Loss.”