As the end of March nears, the overwintering generation of navel orangeworm (NOW) takes flight, bringing with it a threat of orchard infestation. But what if growers could interfere with the NOW life cycle and reduce the size of future generations being born in the first place?

With funding from Almond Board of California and a California Department of Pesticide Regulation Pest Management Alliance grant, researchers at the University of California Cooperative Extension (UCCE) are learning more about the practice of mating disruption (MD) as an effective and economical way to reduce NOW populations in orchards of varying sizes.

“We wanted to see if mating disruption worked for growers in smaller acreages not previously tested and see if mating disruption is worth the investment,” said David Haviland, farm advisor, entomologist, UCCE Kern County. “The results of our most recent research were impressive. On average, the products we tested in 40-acre plots reduced damage by an average of 46%, with grower returns increasing $106 to $125 per acre. When MD was used in 60- to 100-acre plots, infestation levels were reduced by 50 to 77%, with grower returns increasing by an average of $222 per acre.”

MD interferes with the process of male NOW moths findings mates. It works by strategically placing “dispensers” throughout the orchard and flooding the air with a pheromone that disrupts the male’s ability to find females and mate, thus delaying or reducing mating and egg deposition. The result is improved control of one of the most infamous pests that almond growers are up against.

Research and development of MD formulations and products has been underway for decades. However, historically, on-farm MD experiments have involved larger operations, meaning feasibility and economic viability for smaller operations wasn’t as clear.

“Across the Kern County orchards, mating disruption led to a significant reduction in damage from navel orangeworm,” said Haviland.

Additionally, trials confirmed the results of previous research showing that orchard shape impacts success. Effectiveness in triangular orchards is reduced because of low density of dispensers at the “tails” of the triangles compared to square orchards where it’s easier for the orchard to be blanketed by pheromone.

“Overall, we were pleased by the results,” said Haviland. “However, it’s important to recognize that the benefit of mating disruption to each individual grower depends on how bad navel orangeworm is to start with. A 50% reduction of zero damage is still zero, though that’s hardly a bad place to be.”

Fewer damaged kernels at harvest from MD means more almonds sold, but the benefits don’t stop there. Damage reductions from MD lead to a higher-quality crop with an overall lowered risk of contamination.

NOW promotes fungal infections and contamination of almonds. Research shows the Aspergillus mold and the aflatoxin contaminant it produces are associated with reject kernels, and there is a synergy between NOW and this mold.

MD also lacks some of the logistical challenges that come with other IPM practices. The pheromones are dispensed over the NOW flight season and installation happens well before first flight and when labor is more readily available. Takedown can happen anytime, including after the busy time of almond harvest. And since MD uses a natural pheromone, there are no treatment timings, Pre-Harvest Intervals, Restricted Entry Intervals or residues to manage.

With the exciting prospects of MD, it’s still only one piece of the puzzle. 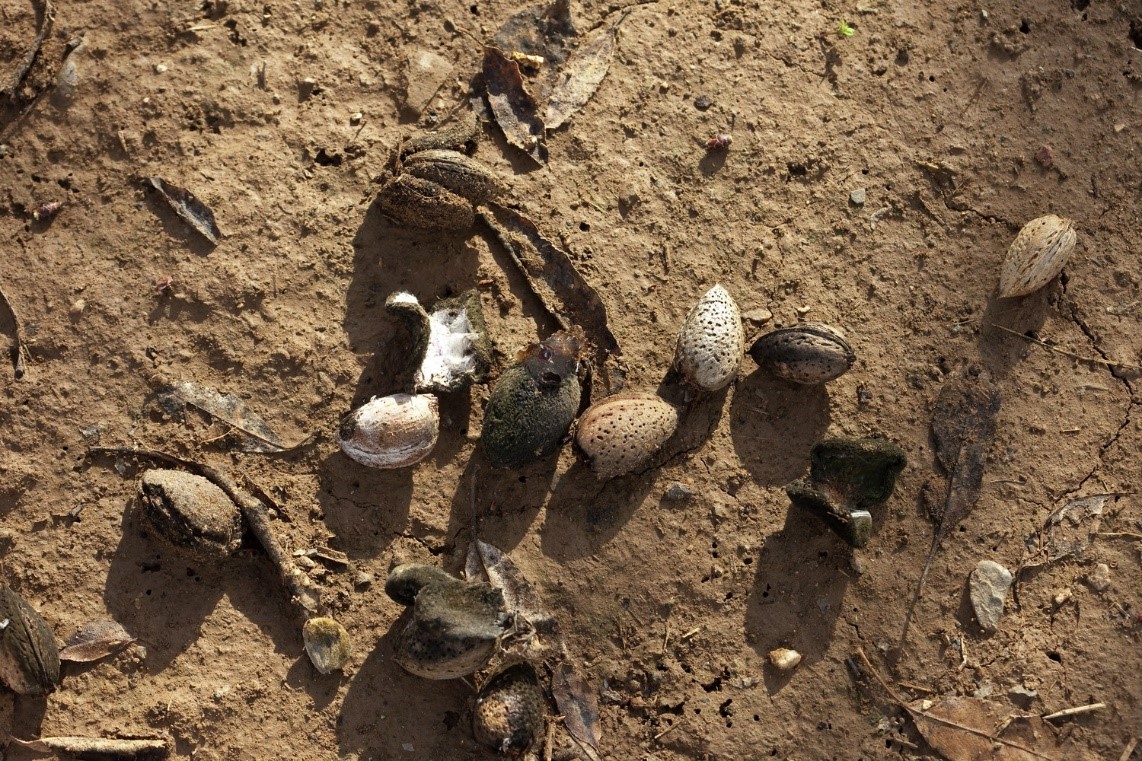 “Employing multiple IPM practices is the most effective way to control navel orangeworm,” said Haviland, “and it all starts with winter sanitation.”

Without mummy nut removal over winter and destruction in early spring, NOW have favorable conditions in which to mature, opening the door to future challenges. Similarly, timing of pesticide applications and almond harvest greatly influence NOW damage, with or without MD.

“It’s about using the different tools and practices together to set almond orchards up for success,” said Haviland. “Today’s mating disruption technology and continuous research are helping bring this to the next level.”

To learn more about MD, check out the presentation by Haviland, Rijal and Symmes, “Insect Pest Management Update,” from The 2017 Almond Conference. More information on NOW control is also at www.ipm.ucanr.edu/PMG/r3300311.html.