As in other markets, the United Kingdom maintains a national database to determine the nutrient composition of common foods. Managed by the government body Public Health England, McCance and Widdowson’s The Composition of Foods Integrated Dataset (CoFID) is a standardized resource for the UK, analogous to the USDA’s National Nutrient Database for Standard Reference. 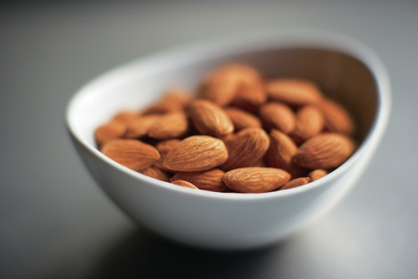 In March of this year, CoFID was updated for the first time in four years with new values included for almonds. The Almond Board of California has been corresponding for some time with those responsible for the UK nutrient database to successfully secure the inclusion of updated almond values within CoFID. In the introduction to the newly-published tables, it’s noted, “Some new and revised data on whole and toasted almonds has been added after consultation with the Almond Board of California, and errors found in the previous dataset have been corrected.”

What does this mean for almond labeling in the UK?

CoFID sets 100 grams as the default portion size for foods. But now, by using USDA values, the almond nutrient values have been updated so that 28-grams (one ounce) accounts for one portion of whole, natural almonds. This portion size comes in at a calculated 155 calories, which is closer to the US value of 160 calories per ounce. The value of toasted whole almonds has also been updated to 162 calories per 28-gram portion.

The previous version of the database only included almonds in flaked and ground form, where one ounce was measured at 171 calories, but the 2019 table features almonds in various forms: 1) flaked and ground, 2) toasted, 3) inshell and 4) whole natural.

Beyond the need to provide accurate information regarding almond nutrient values, this revised data has a larger impact on future labeling. With Brexit on the horizon, there’s a strong possibility that the UK may develop future nutritional labels that differ from those found in the European Union. Having accurate almond nutrient values in place in CoFID, therefore, helps puts the industry in a favorable position should there be significant on-pack label changes.

For more information about CoFID and the Almond Board’s efforts in the UK and EU, contact Dariela Roffe-Rackind at droffe@almondboard.com.