The Almond Board of California (ABC) is proud to announce the winner of this year’s Mummy Shake Video Contest – the Scheel family! 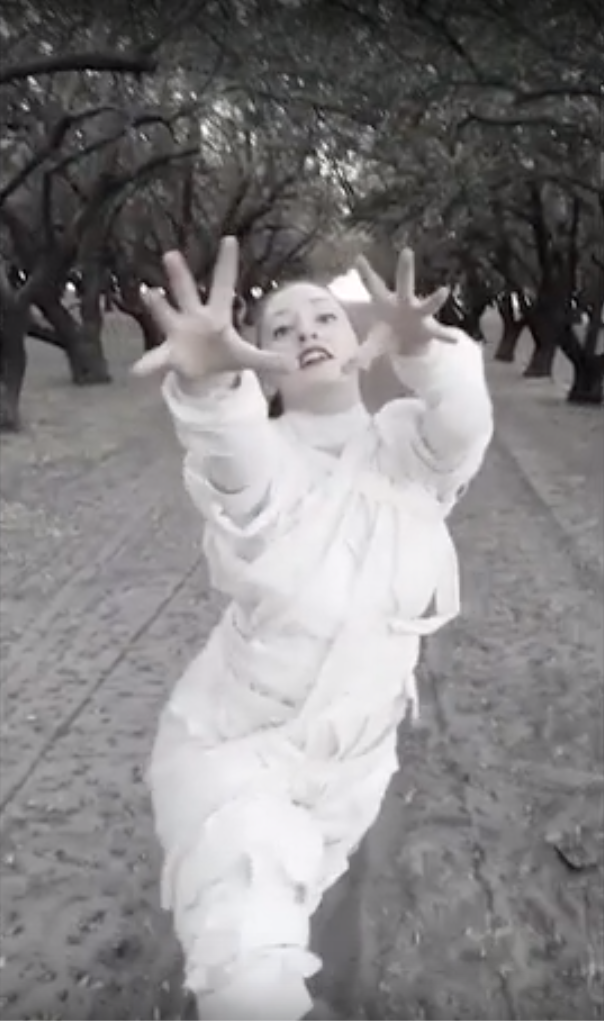 The Scheels are third-generation almond growers in the Ripon/Manteca area. In their video, Amber Scheel dances along to the Mummy Shake while donned in typical mummy garb, with interludes of a side-to-side sway with her mother, Karen, and an appearance from her father Dave, who manages the family’s farming operation.

“When we received a flyer in the mail about the contest, we were so excited to make a video,” said Amber. “I dance professionally, and the contest called for singing and dancing, which is right in my wheelhouse.

“I really wanted to be true to the era of music that the Monster Mash, which inspired the Mummy Shake, came from. I watched 1950’s dance videos and old movies with monsters in them to get inspired. But, of course, in some cases the lyrics told me what to do, like doing ‘The Worm’ to represent ‘navel orangeworm spouses.’”

The Almond Board created the parody song “The Mummy Shake” to help remind growers to break the link between Navel Orangeworm (NOW) and mummy nuts. Now finished with its second year, ABC’s Mummy Shake Video Contest encourages industry members to gather up their friends and family, don their Halloween costumes and dance along to the song in the spirit of both Halloween and the need go back into the orchard postharvest to remove mummy nuts. Participants had from Sept. 16 to Nov. 4 to submit their fun video entries.

Winter Sanitation Should Not be Ignored...

Winter is the time to remove and destroy mummy nuts that harbor NOW larvae, which can hatch in the spring and wreak havoc in the orchard. By removing the nuts, growers are eliminating both a shelter and food source for these overwintering pests. This practice falls in line with the Integrated Pest Management (IPM) program for NOW, established by the University of California with support from ABC, which includes different tactics to combat this pest depending on the time of the year.

“Winter sanitation is the core of IPM programs,” said UCCE farm advisor David Haviland, whose family won the contest last year. In their video, Haviland’s sons dressed in superhero costumes and used their super powers to remove mummy nuts from the trees.

Growers should keep these key tips in mind when preparing to remove mummy nuts from their orchards and do the “mummy shake”:

“We’ve been stressing the importance of winter sanitation for many years, but with increased levels of insect damage in recent crops we decided to shake things up to get growers’ attention,” said Daren Williams, senior director of Global Communications at the Almond Board. “A parody of the Halloween classic ‘Monster Mash’ seemed like a perfect fit given the timing, coinciding with the end of harvest, and the video contest is a fun way to engage growers and their families to spread the word on a serious issue.”

The Scheel family’s winning video, shown below, will be featured at The Almond Conference 2019, held Dec. 10-12 at Cal Expo in Sacramento, among all other submissions in a fun video mash up. There’s still time to register for this premier industry event – visit AlmondConference.com to RSVP for luncheons, book a hotel and check out this year’s agenda.