Mike Story knows sports and can tell you how to use the Pythagorean theorem. So how does a former math and P.E. teacher who grew up around cattle ranching find himself managing 119 acres of almond trees in Glenn County, California?

Story left his teaching career two years ago to convert some family land into almond orchards. The timing was particularly challenging, considering the scrutiny around water use and irrigation practices in the midst of a drought. He found support and resources within the almond community, however. 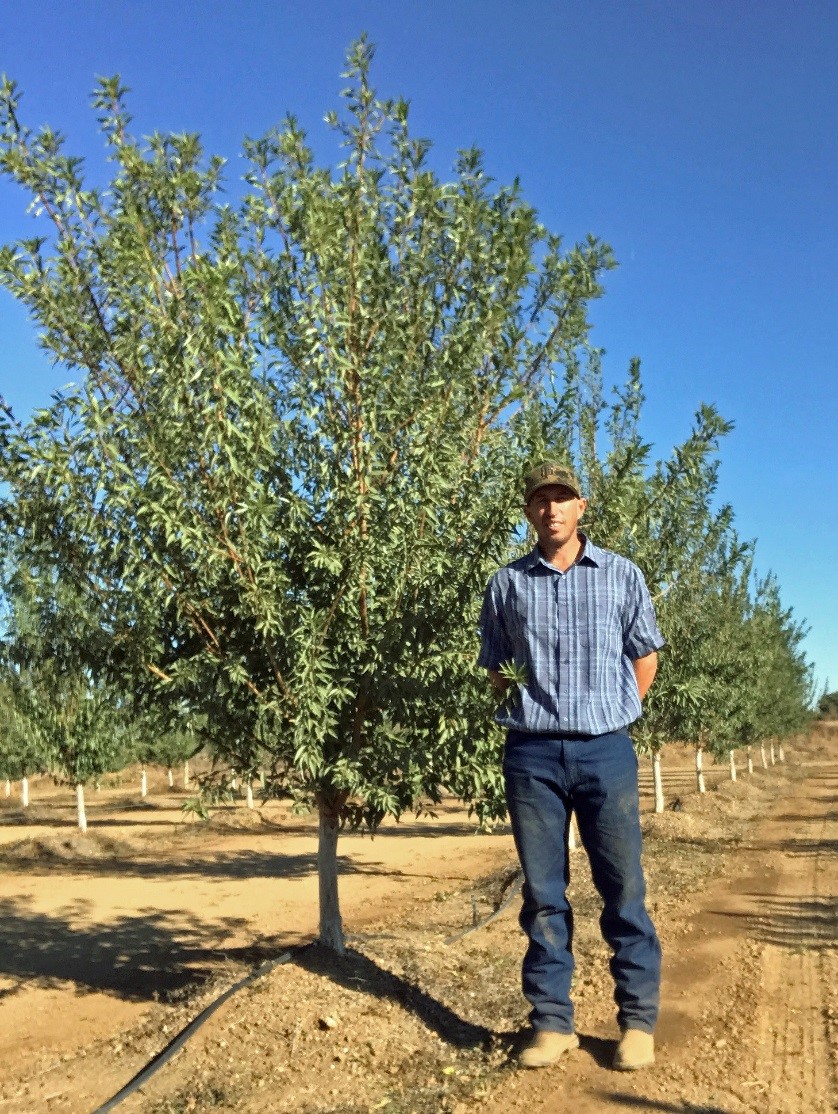 “My father and grandfather were cattle ranchers. They taught me the value of hard work, and my orchards are on land where my grandfather once lived, but they didn’t know anything about almonds,” said Story, who is in his second leaf with his first almond trees. “My dad helps out, but everything falls to me to manage. The community has been so helpful and willing to go out of their way to support me.”

With no background in tree nuts or crop farming, Story immersed himself in learning opportunities – including attending The Almond Conference. It was there that he sat in on an irrigation management session led by Spencer Cooper, senior manager of irrigation and water efficiency. Cooper explained the Almond Board of California’s Irrigation Improvement Continuum and irrigation calculator, tools growers can use to help them make decisions about irrigating in their orchards. This was the first time Story had heard Cooper speak, and he was impressed with Cooper’s simple and clear explanations on the complex topic of irrigation. Story left the conference with a handout, Determining When to Begin Irrigation, and a renewed desire to apply data-driven decisions to his operation.

Armed with new knowledge, Story returned home and reviewed his irrigation numbers from the previous year. He emailed Cooper on a whim to ask a few questions about the irrigation system he was running in his orchards. Much to his delight, Cooper responded and offered to visit Story’s operation.

Cooper’s visit had a big impact on how Story irrigates his almonds. After walking him through the numbers and data, Cooper explained the benefits of implementing a pressure chamber to determine how much stress the trees are experiencing. Cooper explained the difference between rainfall and effective rainfall in an orchard, how to leverage rainfall in his irrigation plans and how to measure the impact on almond trees.

Story quickly realized he had been overwatering his trees to the point of injury. Many were turning yellow, but he overlooked the problem while learning to manage his orchard. After Cooper, along with Dani Lightle from the UC Cooperative Extension, weighed in and introduced him to the benefits of measuring plant water status, Story changed the way he irrigated.

Before working with Cooper, Mike was using ET and a soil moisture sensor to support his decision-making process. After Cooper’s visit, he added the plant water status by using the pressure chamber which completed his irrigation data to further improve decisions.

He uses micro sprinklers to irrigate his almonds. After adjustments were made to the duration of irrigation, and sprinkler sets were configured to take the soil type and tree stress into account, Story began to see a difference in his trees. Over half of the trees that were showing water injury rebounded to full health, saving him thousands of dollars in future yield potential and replanting costs.

Story relied on his previous work as a math teacher to help him be as precise as possible with his irrigation approach. He is good with numbers and is always looking for patterns in the data collected from his orchard to help him make decisions. He uses what he gathers to try to predict what the trees need ahead of time.

Story says his investment in technology has been to his advantage. He has saved money on pumping water and recaptured yield potential for the future. He also says the time invested to understand how to use data pulled from his orchard has been invaluable. He now has peace of mind knowing what the numbers mean, thanks to Cooper’s insight and support.

“This is really the first year of the life of the orchard, so this has been good timing meeting Spencer,” said Story. “You only have one chance to get off on the right foot. I don’t want to look back and wish I had done things differently.”

Story suggests reaching out to Cooper for consultation to help benefit your orchard.

“All the investment in a new orchard is worth a quick phone call or email,” said Story. “It is only going to help your orchard; it is not going to hurt it.”

Story has also learned a lot from online resources, specifically the Irrigation Continuum from Almond Board of California’s website. The Continuum outlines the best practices for improved irrigation and can help growers continually improve.

“With the Continuum, you are not competing with other growers,” says Story. “I am competing with myself to try to advance my techniques to the upper level of irrigation management.”